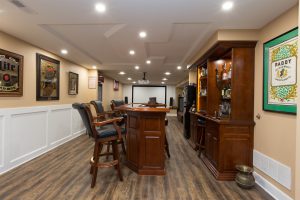 The great thing about basement finishing is that you can almost double your livable space at a fraction of the cost compared to adding an addition. According to the Remodeling 2017 Cost vs. Value Report, a midrange basement remodel in the Des Moines area costs $69,480 while adding $47,238 to the resale value and recouping 68% of the cost.

Compassion Builders works with you to design your basement in a manner that provides what you need from the space and maximizes its functionality with aesthetically pleasing details.

In the top photo, this client wanted an entertaining space divided into three areas (bar, game room and home theatre). There is a beautiful maple bar that this client wanted incorporated into their space. The challenge was where they wanted it located. The mechanical ductwork was going to interfere with their seating headroom and inhibit the viewing of the screen.

We were able to place it in the middle of the longest portion of the basement solving both issues as well as increasing the size of the gaming area. A bulkhead was created to take up the small space above the shelving to provide a finished look. We were able to recess the refrigerator so the front didn’t intrude into the walkway. Room definition was added by the short walls at the four corners of the space as well as minimally lowering the ceiling allowing us to create the tray ceiling that follows the perimeter and outlines the bar.

This basement remodeling distinction was created by changing the surface texture on the ceiling to smooth on the lower portion and keeping the knockdown on the recessed portion as well as adding the wainscoting made entirely from drywall for a completely seamless look. Lighting was achieved by using 4 inch 4100K LED recessed lighting divided into two dimmable switches. One for the perimeter and one for the three over the bar. Dimmable LED lighting was also added to the display shelving by adding a recessed unit on each side and a LED tape behind the face frame in the center.

The next photo is for a basement finishing with a home theatre where we encountered another challenge. On the left corner is the sump pump that they didn’t want to relocate. The plan was to create a closet to cover it, however , he size of screen they wanted was forcing the screen and projector off center and would obstruct the viewing. 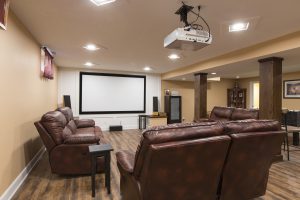 We solved this problem by creating a box around it with a lift off top. This allowed the screen to be centered, access to service the pump as well as a place to set their surround speakers. We balanced this on the opposite side next to their equipment tower which allowed a place to hide the subwoofer. We accented and defined this space with drywall wainscoting around the screen as well as medallions around the dimmable 6 inch 4100K recessed lights. The steel support posts were relocated to allow an equal spacing and was covered by oak mitered columns so that it resembles a solid timber.

Contact Compassion Builders for us to become your preferred Basement Finishing and Remodeling Contractor today.

Dedicated to quality, provides great design ideas and does not cut corners. If you want it done right, this is your company.

Get to Know Us!